A documentary about the back stories of Moluccan soccer players in the year 2021. The year in which it will be 70 years since their fathers and grandfathers first arrived in the Netherlands, after a month-long boat trip from Indonesia. Only to eventually never return. Een documentaire over de achtergrondverhalen van Molukse voetballers in het jaar 2021. Het jaar waarin het 70 jaar geleden is dat hun vaders en grootvaders voor het eerst in Nederland aankwamen, na een bootreis van een maand vanuit Indonesië. Om uiteindelijk nooit meer terug te keren.

Both their fathers and grandfathers and themselves became Soldiers for Orange

The documentary "Soldiers for Orange" is about Moluccan fathers and sons who each in their own way fought for Orange. One as an actual soldier in the KNIL and the other by fighting for victory in the Dutch national team. The grandfathers and fathers of soccer internationals like Simon Tahamata, Sonny Silooy and Giovanni van Bronckhorst fought on the Dutch side during the occupation of the Dutch East Indies. And before them, so did their fathers and grandfathers. For generations.

Giovanni van Bronckhorst, grandson of Lena Sapulette, was the first Moluccan to captain the Dutch National Team during his 64th international game. Later at the 2010 World Cup in South Africa, during the semifinal against Uruguay, he also scored as captain. FIFA chose this goal as the most beautiful of the tournament. The entire Moluccan community is extremely proud of 'their' Giovanni!

When van Bronckhorst, Petta and Landzaat are all three selected for the Dutch national team, they emphasize the Moluccan togetherness in the media. Landzaat: 'Unique isn't it, three Moluccans selected for Orange? Our people used to fight for the Dutch tricolor in Indonesia; now we defend that same tricolor as soccer players on the field. Something like that does a lot to me. It is something that I’m very aware of.’ As the son of a Dutch father and Moluccan mother, Landzaat wants to dedicate himself to the Moluccan cause. 'I feel a close connection with the Moluccans.'

A story that illustrates how difficult it was sometimes for these soccer players to come out for the Netherlands is the story of Simon Tahamata. He is not in the Netherlands during the liberation of the second hijacking in 1977 on Sunday, June 11. He is in fact staying in Toulon in the south of France at the time, where he is playing a prestigious youth soccer tournament with the Dutch national team. He hears it from a colleague who is from the Netherlands. 'I was exhausted, I couldn't bring myself to play at the tournament. I wanted to go home the same day!' Simon feels the pain of a Moluccan. He is a Moluccan. Father Lambert Tahamata has instilled the RMS ideal in his children.

But in 1976, Lambert made a major concession to his conscience. He becomes a Dutchman. Until then, the Moluccans are officially stateless. Because they insist on returning, they refuse Dutch citizenship. They have a pink aliens' passports, making it difficult for them to go abroad. Simon is bothered by this. If he is going to play with Ajax and the Dutch Junior Team more often across the border, he has to arrange all kinds of visas. As a Dutchman, he travels around effortlessly. Lambert and his wife Octovina put their principles aside for Simon. 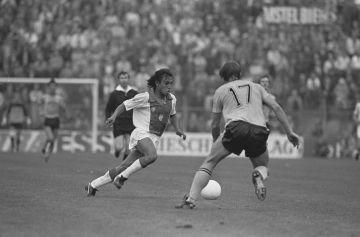 This documentary discusses what it was like for these soccer players to fight for the Netherlands despite its fraught history. How it feels that this history, their history, is so unknown among the Dutch so that the dichotomy going on within them is not seen. Bart Latuheru has even, in the Moluccan neighborhood in Capelle aan de IJssel, stood on the barricades and had a clash with the ME. He is one of the soccer players who suffered the direct consequences of the hijackings and hostage taking.

Imagine Frenkie de Jong standing on the barricades and having a clash with the ME, is that at all possible? This documentary answers all these questions, and many more. It offers a unique look at this generation of soccer players who served as bridge builders between the native Dutch and the Moluccan population.

The Drama Without Color